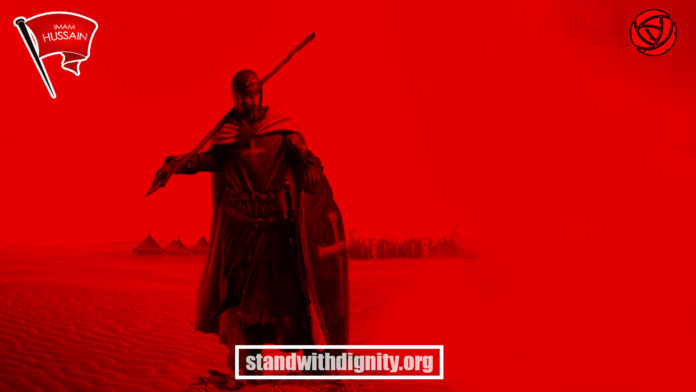 Wahab ibn Abu Wahab, a Christian, and his wife, also a Christian, were married only a fortnight ago. Having witnessed what went on between Hussain and his foes, they sympathized with Hussain and embraced the Islamic creed at his hands. The words of the Imam’s sermons penetrated their hearts and found an echo. Wahab’s mother, still Christian, said to her son, “I will not be pleased with you till you give your life away for the sake of Hussain .” Wahab charged at the enemies of Allah like a lion, and when a man from Kufa severed his right arm, he transferred the sword to the left and went on fighting as if nothing at all had happened. Soon his left arm, too, was lopped off by a single stroke of a sword, and the hero fell to the ground. His wife watched the whole scene.

She pleaded to the Imam thus as she darted towards his enemies, “O Imam! Please do not ask me to go back! I prefer to die fighting rather than to fall captive in the hands of Banu Umayyah!” The Imam tried to dissuade her, explaining to her that fighting is not mandated on women, but at seeing her husband martyred, she ran to him and, putting his lifeless head in her lap, she began to wipe it with her clothes. Soon a slave of Shimer put an end to her life while she was thus engaged; may the Almighty shower His blessings upon her. It is unanimously agreed upon by the historians that she was the first lady to be martyred on that day. Wahab’s mother was very happy. She said,

“Allah! Thank You for saving my honor through my son’s martyrdom before the Imam.” Then the old Christian lady turned to the Kufians and said,

“You wicked people! I bear witness that the Christians in their churches and the Zoroastrians in their fire houses are better people than you!” Saying so, she seized a stout candle (or, according to other accounts, a tent post) in her hand and fell upon the enemies, sending two of them to hell. The Imam sent two of his companions to bring her back.

When she stood before him, he said to her, “O bondmaid of Allah! Women are not allowed to go to war. Sit down; I assure you that you and your son will be with my grandfather in Paradise.” Another martyr to be mentioned here, who was also Christian, is John, a slave of the great sahabi Abu Tharr al-Ghifari, may Allah be pleased with both of them. He had been for many years in the service of Abu Tharr, and although he was a very old man (according to some accounts, he was 90 years old), he fought Hussain’s enemies till he was martyred.

Ibrahim Jabbar – Trip to Karbala /Love of Imam Al-Hussein (A)