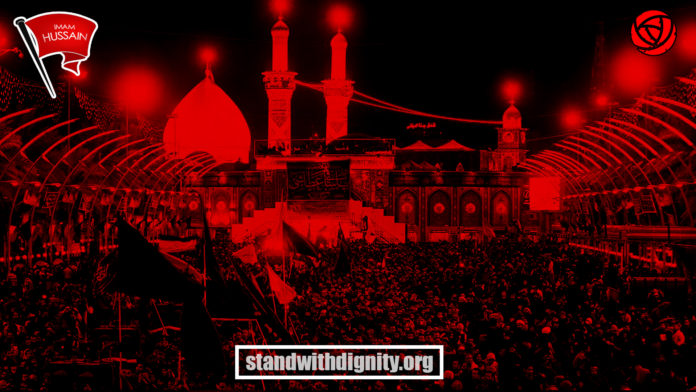 These are the most important questions you’ll ever ask yourself–what rouses your soul and speaks to your heart?
Justice? Equality? Freedom?…fair enough. But ask yourself, at what point would you take a stand–when your own rights are ignored? What if the rights of your family were usurped? How about a friend, a neighbor…a complete stranger?

The real question is: How far would you go, what would you give? It’s easy to imagine and mentally play out scenarios where we take a stand and do the right thing. But when it comes down to it–many of us falter and are unable to live up to our ideals of social justice. This is what separates us from giants like Martin Luther King, Mahatma Gandhi and Imam Hussain (PBUH). King and Gandhi campaigned equality for the most oppressed and downtrodden of their time, and sought civil liberties and national independence through nonviolent protest. They rose up while others remained silent; they realized their situation, and took a stand. In doing so inspired millions to follow their example.
In the year 680 AD, there stood a man called Hussain–surrounded and heavily outnumbered. Hussain, his family and companions made their final stand. Hussain took every step to prevent conflict, and warned Yazid’s army of the moral and ethical implications of the cruelty they were about to inflict on the household of the Prophet. Hussain’s plea and ethical behavior was observed by Yazid’s forces and some switched to the side of Hussian. Hussain stood for something different… something that sets him apart. Hussain’s message speaks to each and every heart that hears his story.
When Hussain saw corruption and injustice seep its way into the very fabric of society – when he saw the principles of honesty, justice and equality abandoned by the people. Hussain knew something had to be done. The authorities were fearful of Hussain’s influence and threatened him with an ultimatum: give his allegiance (to the corrupt ruler of the time) or be slain. For Hussain the choice was a simple–stand on the side of Justice. Surely it would been easier to acquiesce but Hussain’s sense of purpose was derived directly from Prophet Muhammad (PBUH) and Imam Ali (PBUH). In taking a stand Hussain changed the course of history.
Hussain’s rise against oppression, Hussain rise against corruption, Hussain’s rise against the moral decay of society sparked a revolution. Today millions across the globe remember Hussain – not just for his bravery, but also for what he stood for. His message inspires and lives on in anyone who stands up for justice across the world today and throughout history.