Ali Akber: The son of Hussain

One of the most oft recited tragedies is the event of Karbala. Year after year, Muslims across the globe narrate the event at the start of the New Year in the month of Muharram till the fortieth day. What is more, the incident is retold throughout the year. Yet, ironically, many are still unaware of the event, or the heroic personalities involved. However, for those who are aware, Hussain ibn Ali is an individual whose stance for justice has become immortal. Imam Hussain, the grandson of Prophet Muhammad stood against tyranny when he refused to pay allegiance to the corrupt ruler of the time. For that, he sacrificed his life along with his close companions and family. They were a band of seventy-two against an army of over 30,000. His son, Ali Akber was the first among his family members to go and defend the principles of righteousness. Ali Akber was truly the apple of his parent’s eye. He was very handsome and had a loud and beautiful voice. It was he who always recited the call to Prayer, the Adhan. On the morning of the Day of Ashura, he recited the Adhan. Upon hearing it Imam Hussain and the ladies in the tent began to cry knowing that this would be his last Call.

Finally, when the time came for battle and all the companions had already become martyred, Ali Akber requested his father to go to battle. With a lowered head and tears encircling his eyes Imam Hussain gave him permission to go. he raised his forefinger towards the Heavens and said,

“Oh Allah! You be the witness that I have dispatched this young man to the battlefield to wage war on the enemy – who from the view of handsomeness, perfection, and character was most similar to Your Prophet (saw). And whenever I used to be eager to see the Holy Prophet (saw) I looked upon his face. Oh Allah! Deprive them from the blessings of earth, make their population scattered, inducing discard among them! Because they have invited me with the promise of uprising in my support, instead they arose against me and are least reluctant from spilling my blood.”

The Imam (as) then looked toward the commander of the opposing army Omar b. Sa’d and called out,

“May Allah deprive you from His mercy, make your affairs inauspicious, and impose upon you someone, who after me, will cut off your head from your body in your bed. And may Allah cut off you bonds of relationship as you have overlooked my relationship with the Holy Prophet (saw).”

This is when Ali Akber attacked the enemy as he recited the famous verses,

By Allah! We are closer to the Holy Prophet,

I will attack you with my spear until it is bent,

I will defend my father with my sharp sword,

As it is expected of a Hashimite-Alawite youth,

How Ibn Ziyad (la) dares issue orders about us.”

In the three days in which there was no water to drink, Ali Akber was able to battle the enemy untouched. At that point He returned to his father and asked,

“Oh, my father! This thirst is killing me as well as this armament is hurting me, is there a cup of water which would renovate my strength to combat the enemies?”

“Oh, my son… Continue to battle, it will not be long before you grandfather (saw) brings you a cup of water after which you will never feel thirsty again.”

Ali Akber returned to the battlefield, he recited the following,

“Truly, the war manifests the inner essence of a valiant,

The truthfulness of claims is proved at the end of war.

By Allah! I am not going to be separated from you,

Until forcing your swords to be retired in their sheaths.”

As Ali Akber (as) is in the midst of battling the enemies, he was struck by an enemy. A spear pierces his chest, and as he falls to the ground it breaks, leaving only the metal head in his chest. He calls out to his father, “Oh my father! My Salaams to you!”

Imam Hussain tore through the battlefield in search of his son, leaving the enemy to scatter as they rushed to escape from him. As he reached his son, he embraced him where he lay on the ground. Ali Akber hugs his father with one hand, leaving the other against his chest over the head of the spear.

This statement alludes to the battle of Khaybar in which his father heroically overcame the enemies with his all his might.

At the time, the fortress of Khaybar were made of steel, and it is said that at least twenty men were needed to push open or close each gate.

After three days of standstill, right after the morning prayers, the Prophet (pbuh) summoned Imam Ali. Imam Ali immediately responded. He jumped his horse over the moat and with one hand swung open both the gates of the fortress with such force that they broke off their hinges, and he carried them to where he lay them across the moat to form a bridge. The Muslims rode into the fortress and conquered Khaybar, due to imam Ali’s strength.

Imam Hussain then removes the spear from his son’s chest, and he takes his last breath. Hussain holds the lifeless body of his beloved son Ali Akber in his lap, and as he looks towards the River Euphrates weeping as his brother, who was martyred earlier while trying to retrieve water from the river for the children, calling out,

After the tragedy of Ali Akber, it is said that if his sister, Zainab had not been by her brother’s side, he would not have survived the sight of his son in the state he found him.

This is one of the many heart wrenching incidents that Imam Hussain had to face before having himself unjustly and brutally killed. However, their noble sacrifices have brought about eternal lessons for humanity as to how to live and die as Imam Hussain taught by words and action: “Death with dignity is better than a life of humiliation.” 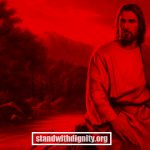 Martyrdom in Christianity and Islam