As in any historical event that has been passed down in history, it is prone to having misconceptions develop with time due to the propagation of inaccurate information or misrepresentation of facts. The story of Karbala is not an exception – over time misconceptions has unfortunately developed and is passed on in lectures and gatherings which is not exactly true. Some of these conceptions are due to error in propagation, however others are done intentionally to mislead the public. The misconception we would like to discuss is the common thought and misunderstanding that “Imam Hussain led a revolution” or “Imam Hussain rebelled” which led to the Karbala tragedy. Actually this is not true and conveys a wrong message to all Muslims and non-Muslims. In fact by claiming that Imam Hussain “led a rebellion” against Yazid, there are those among the Muslims who blame Imam Hussain himself for the killing and tragedies which took place in Karbala.

If we study history, we will find that the Umayyad propaganda depicted the captives of Imam Hussain (AS) as Khawarij (outlawed ones) who rose against the legitimate Caliph. They gave the impression that the family of the Prophet (SA) are callers of mischief and rebellion against the legitimate government. Furthermore, the political authority issued direct orders to organize celebrations and processions in every city and village in order to give the false impression that the whole nation supports Yazid in what he committed against Imam Hussain (AS) and his family on Ashura. This behavior is typically practiced by an oppressive regime by initiating rallies and processions supporting it to give a false impression that the people are supporting that regime.

However, it is our responsibility to understand the pure truth and clarify that which needs clarification. When Muawiya ibn Sufyan passed away, it was announced in Damascus that Yazid became the new ruler of the Islamic state after his father broke the treaty he made with Imam Hasan (AS) and instead pushed for Yazid’s installment as Caliph. In order to strengthen the pillars of his regime, Yazid immediately sent a letter to his governor in Madina who was also his cousin, Waleed ibn ‘Uqbah ibn Abi Sufyan, which read the following:

It was a clear order from Yazid ordering the killing of Imam Hussain (AS) if he didn’t give his pledge of allegiance to him as Caliph of the Islamic state. It is well-known that the Islamic religion does not condone forcing people to give their allegiance against their own free will to a new ruler. It prohibits the use of threat or persecution if a person does not voluntarily give his allegiance, let alone killing him. It was also not the practice of the rulers before the Yazid (including his own father) and this policy was unheard of. Before Yazid, whoever wanted to give his pledge of allegiance to a ruler can do so, and whoever doesn’t is free to exercise their free will. In both cases, this does not affect the individual civil rights in the Islamic state. No one, at least according to the majority of Muslims historians, was ever forced, persecuted, or kicked out or killed because of his or her refusal to give a pledge of allegiance to a Caliph.

Yazid stirred mischief by his decision to kill Imam Hussain in Madina if he refused to give his pledge of allegiance. This decision led to the sequence of events after that. So Yazid was responsible for the mischief and was the cause of what transpired later on in Karbala since he wanted to force Imam Hussain to give his pledge of allegiance against his will, and to choose between that and death.

When Imam Hussain (AS) heard that Yazid had issued orders to kill him and was in his pursuit, he was forced to leave Makkah one day before the rituals of Hajj was to start due to the conspiracy plotted against his life. This was one of the most difficult decisions in his life to make to abandon the rituals of Hajj when it was just a day away. But he did so to protect the religion of Islam and to preserve the sanctity of the Holy Haram in Makkah. He left heading towards Iraq after he received multitude of letters from the people of Al-Kufa inviting him to come so they can support, protect, and provide him a safe haven. He did not want his blood to be shed in the Sacred House of Allah (SWT) and he said, “To be killed in Iraq is better to me than being killed in Makkah.”

Imam Hussain (AS) went out with his women, children, and less than a hundred men from his family, relatives, companions, and supporters in a civilian caravan that did not have any soldiers, military equipment, or preparations for war. The sad journey commenced from Makkah in Hijaz to Al-Kufa in Iraq. Can we consider a confrontation between 20 or 30 thousand soldiers with 100 or less who are in a civilian caravan containing women, children, elderly, and sick…is this confrontation considered to be a battlefield? Or should we instead call it an execution field or butcher place?! Is there any compatibility or equality in terms of number, equipment and supplies such that we can call it a battlefield and accordingly apply what is usually applied to a battlefield?

Indeed, what took place in the land of Karbala was not a battlefield or rebellion by Imam Hussain (AS). He had no intention to fight and no choice but to face the opposing army who were in his pursuit to kill him simply because he refused to give his pledge of allegiance to a corrupt ruler like Yazid!

History records the position of Imam Hussain (AS), and one instance which clearly defines his stance was when he led them in the noon prayers and delivered a speech with the following excerpt to the opposing army:

“Oh People! Here I present my excuse to Allah and to you in this place. I did not come to you until your messengers and letters has reached me stating ‘Come to us as we have no leader, may Allah unite us with you on the right path.’ If this is still your opinion and position, here I am! So, if you assure me about the validity of your invitation, and if you give me your solemn promise and your certified pact, I will then enter your country with you. But, if you did not do that, and you dislike my arrival and hate my coming, I will then depart you and return back to where I came from.”

Now, is this the speech of a man who came to head a large well-equipped army seeking to fight the ruler or Caliph such that military forces need to be recruited against him? In his speech, does Imam Hussain threat to fight, or use weapon, armed forces, and does he insinuate that in anyway? Or is this the speech of a peaceful man who is the victim of being persecuted, chased, and has fled from the tyranny of the oppressive ruler seeking a safe haven for him and his family whom the people of Kufa invited to protect? So Imam Hussain (AS) came to them after he found no other alternative and after the new oppressive ruler persecuted him even in the sacred House of Allah! Here, he is politely offering to them to either give him protection as they promised, or they leave him to return back home.

Furthermore, if Imam Hussain (AS) was heading a great army, would he be in need to address these 1000 men, while fighting them would be an easy task for him? Rather, this is a great proof that Imam Hussain (AS) was in a civilian caravan that only included his family and some of his companions, all of whom did not exceed 100 persons. Did that deserve the dispatching of an army consisting of 30,000 men to fight this civilian caravan and kill Imam Hussain (AS)? Surely, it is a crime that indignifies the history of mankind! It was just a peaceful innocent civilian caravan that simply sought a safe haven to escape the aggression and tyranny of the new corrupt ruler, Yazid. It was a small civilian caravan composed of wandering men, women, and children whom the Yazid terrorized by his decree to kill all of them. So they became like an injured and imprisoned bird which tries to escape away from its hunter and predator and which seeks protection in any place. Now does this injured and imprisoned bird deserve that military forces be dispatched to fight it? This is impossible to happen even in the worst jungle in the world! So how can this happen in the human world?! If we truly understand the events which led to Karbala and recognize the helpless position of Imam Hussain (AS) and the fact that he did not intend to fight or kill, then we can never fall in the misconception of claiming that Imam Hussain led a revolution and rebelled against the ruler. For this is an injustice that harms the cause of Imam Hussain (AS) and hinders the message of Karbala from reaching the masses in its fullest capacity! We pray to Allah (SWT) to protect the message and mission of Imam Hussain (AS) from any false claims, misrepresentations, and misunderstandings. 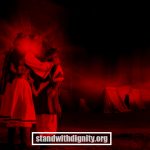 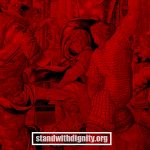 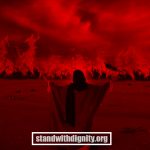