KARBALA, Iraq (Reuters) – The Iraqi holy city of Karbala was shrouded in black on Wednesday as hundreds of thousands of Shi’ite pilgrims converged to mourn the death of the Prophet Mohammad’s grandson here 1,300 years ago.

Most shops were shuttered and draped in black cloth as a sea of black-clad pilgrims thronged the streets carrying black, green and red flags symbolizing mourning, Islam and the killing of Imam Hussain.

City officials said an estimated 2 million pilgrims were in Karbala to mark Ashura, the main event in the Shi’ite religious calendar. It commemorates the death in battle of Imam Hussain, one of Shi’ite Islam’s most revered figures.

To prevent attacks by insurgents who have previously targeted Ashura events, Iraqi security forces sealed off the city to vehicles and set up checkpoints to body-search pilgrims arriving from other cities, many having walked for days.

In March 2004 attacks on Ashura pilgrims in Karbala and Baghdad killed more than 170 people.

The U.S. military said this week that Iraqi Special Forces had thwarted a plan to attack pilgrims after launching an airborne assault on a guerrilla training camp in a village near Salman Pak, south of Baghdad, and detaining 26 suspects.

In January a suicide bomber killed 50 people and wounded 138 in a Karbala market near Imam Hussain’s gold-domed mosque.

The Ashura commemoration, which climaxes on Thursday, was the biggest gathering of Shiites Islamist parties won a near-majority in December’s parliamentary polls, enraging Sunni militants who accused them of cheating.

Karbala residents set up food stands for the pilgrims, despite warnings from local police that militants might try to hand our poisoned food or drinking water.

“We have 8,000 police and soldiers spread through the city.” Police chief Brigadier Abdul-Razzaq al-Ta’ee told Reuters.

Pilgrims, many of whom slept in the streets overnight, listened to story-tellers recount the story of Imam Hussain.

Ashura is the 10th day of the lunar month of Muharram, when according to Islamic tradition, Hussain was killed in AD 680 in a battle with the army of Caliph Yazid. He was decapitated and his head taken to Damascus, the seat of Yazid’s Umayyad dynasty.

During the ceremony, Shiites beat their heads and chests and gash their heads with swords to show their grief and echo the suffering of Imam Hussain. Under Saddam Hussain’s (Sunni) secular rule, such displays were banned.

Soldier Hadi Haider, 40, arrived in Karbala at dawn after walking for more than five days from Basra, 300 miles to the south.

“By doing this we are getting closer to Allah because Hussain is the son of the daughter of the Prophet Mohammad,” he said, adding that the fear of possible insurgent attacks had not deterred him. “If we die we are considered martyrs,” he said.

“Everyone has their own rituals. The Christians and Jews have their rituals, we have ours. Terrorists try to hurt these rituals, but by our unity we will defy them,” she said.

In Baghdad, police closed main roads in Kadhimiya district, another place of pilgrimage during Ashura. At the last major Shi’ite festival in August, more than 1,000 pilgrims died there when a crowd stampeded over a bridge, sparked by rumors that a suicide bomber was preparing to blow himself up. 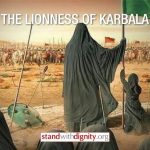