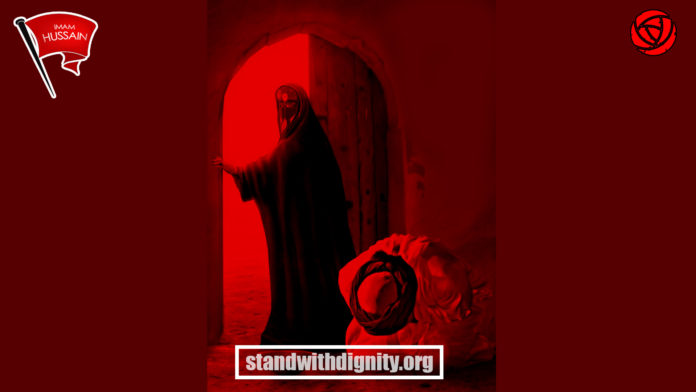 When we hear the word “Madhloom” (oppressed) or “Madhloomeyat” (oppression), we often associate that concept with the most oppressed of our Imams, who is, Imam Hussain (AS).  We acknowledge the fact that each and every one of our 12 Infallible Imams from the Prophet’s family were heavily oppressed by the tyrant regimes of their time and were eventually killed. However, the peak of oppressions has been embodied and represented in the holy figure of Hussain (AS) who is the Master of Martyrs and Qateel Al ‘Abaraat (he whose death remembrance induces tears of grief).

However, when we speak of his twin soul, Imam Hasan (AS), we rarely think of him as an oppressed person nor do we think of him as an Imam who offered a sacrifice (like his brother). The bitter reality is that unfortunately even many if not most of the supporters and devotees of Imam Hasan failed to recognize this aspect of oppression and sacrifice in their Imam, which is in itself a type of oppression!  Not only that, but little is said about the virtues of Imam Hasan and his pure autobiography.  It is also noticeable that there are only a handful of poetry and lamentations recited for Imam Hasan (AS) Perhaps that is due to the fact that Imam Hasan (AS) emerged between two great stars, his father Imam Ali (AS) and his brother Imam Hussain (AS) whose lanterns of guidance blinded the eyes from rightly appreciating the nearby beacon of light.

History narrates to us the key event of Sulh Al-Hasan, which is the peace treaty which Imam Hasan (AS) made with Muawiya ibn Abi Sufyan where he accepted to give up his right of Caliphate to Muawiya in exchange for a number of conditions.  Because of this decision which many of Hasan’s supporters did not understand, they turned against him and blamed him for making this peace treaty, arguing that he brought shame to the believers by this act which seemed as “surrender” to the enemy.

But what we fail to recognize is the following: What Imam Hasan (AS) did was a great sacrifice for the sake of Islam and more specifically, the School of AhlulBayt. By his great wisdom and insight, he made the correct decision to save Islam from the danger it was facing, just like his brother Imam Hussain (AS) did, each in a different manner depending on the circumstances present and the role defined to them by Allah (SWT).

A similar example is demonstrated by Imam Ali ibn Abi Taleb (AS) who exercised the highest degree of patience when his right for caliphate was usurped by the first, second, and third Caliph.  He did so for the sake of a higher goal, to save newly-born Islam from bloodshed and mischief and to safeguard the religion from collapsing upon the Prophet’s demise.  Imam Ali (AS) describes his patience in Nahjul Balagha (Sermon 3), “Beware! By Allah, the son of Abu Quhafah dressed himself with it (the caliphate) and he certainly knew that my position in relation to it was the same as the position of the axis in relation to the hand-mill. The flood water flows down from me and the bird cannot fly up to me. I put a curtain against the caliphate and kept myself detached from it. I found that endurance thereon was wiser. So I adopted patience although there was pricking in the eye and suffocation (of mortification) in the throat.”

Imam Hasan (AS) learned from his father a great lesson of patience, sacrifice, and vision for the betterment of Islam. He carefully assessed the situation of his time and observed that approximately 70% of the Islamic state was under control of Muawiyah. Everyday, more and more Muslims surrendered to this tyrant and gave their pledge of allegiance after being bribed. The state of affairs of the Muslim Ummah was turning from bad to worse. The people were disobeying their leader Imam Hasan and he lost many of his supporters as they were lured to the other side for the sake of materialistic gains. The true supporters of Hasan were a small minority and there was almost no hope left for victory over Muawiya.  To demonstrate that, Muawiyah sent over a camel to Imam Hasan that carried a load of letters of betrayal offering their support to Muawiyah. The position of Imam Hasan (AS) was very critical; he could choose to fight Muawiyah till the very end which will very well lead to the inevitable killing of all his family members and supporters.  This decision would’ve naturally led to the extermination of the pure Muhammadan Islam embodied in the path of the AhlulBayt (AS).

Rather, Imam Hasan (AS) chose to make a peace treaty while stipulating his own conditions as if he is the victorious one and not the underdog! And he surely was the victorious one with great foresight of the future.  He requested clemency and safety for all the supporters of the Prophet’s purified household (Shi’as). They should be able to freely travel without fear of being attacked or having their property confiscated.  More importantly, moving forward no one should curse Ali ibn Abi Taleb (AS) on the pulpit anymore as was the custom during that time.  Also, Muawiya cannot appoint a successor after him and the caliphate will automatically be transferred to Imam Hasan upon his decease. By these stipulations, Imam Hasan protected the small minority of true followers of Islam. For example, when Muawiya later on requested Imam Hasan (AS) to have his supporters fight the Khwarij in assistance to the Caliph, Imam Hasan (AS) refused and chose to protect his followers by doing so. As a result, the long-time animosity between the Khwarij and the supporters of Imam Ali (AS) subsided and this was for their benefit.   Imam Hasan (AS) also exposed the real intentions and deceitful behavior of Muawiya. Furthermore, after making the peace treaty, Imam Hasan (AS) moved out from Kufa to the city of Medina with his family and a group of his true supporters in order to create the underground infrastructure of the true path of AhlulBayt (AS) which has been preserved till today.

It is generally known that had it not been for the exceptional performance of Imam Ali (AS) in the battlefield, Islam would not have existed today.  And we recognize that had it not been for the great sacrifice of Imam Hussain (AS), the pure Muhammaden Islam would not have been saved from the perils of corruption and deviation.  Along the same lines, we can also that had it not been for the sacrifice of Imam Hasan (AS), the true path of AhlulBayt (AS) would not have been preserved or continued till today!  It is no wonder that in reference to the peace treaty, Imam Hasan (AS) directs these words to his followers and to all the Muslims during his time and for the future, “By Allah, what I have done for my Shi’a (supporters) is better than everything that sunrise and sunset brings!”