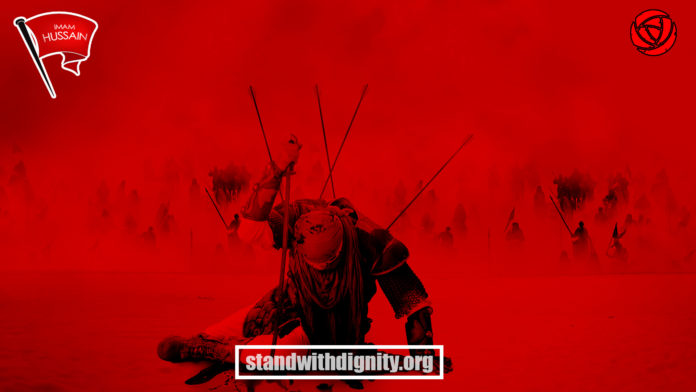 A number of misconceptions about the tragedy of Karbala have been popularized by, of all people, Muslim scholars. These misconceptions are not necessarily due to any bigotry on the part of the scholars. Rather, they arise because of their total misunderstanding of the true nature of the conflict in Karbala. These scholars think that Karbala was a military campaign as Imam Hussain (a) sought to gain political power. The truth is that it was a battle of conscience as the Imam wished to transform the Muslim ummah. This article will highlight four major misconceptions that misconstrue the Imam’s motives and belittle the significance of the tragedy. The first two and the next two misconceptions are inter-related as one misconception in the pair leads to another in that same pair.

Misconception # 1: Imam Hussain (a) was an “Adventurist”

An adventurist is a person who takes unknown danger or risk. They have a goal in mind but that goal is typically for oneself, not for the society as a whole. Imam Hussain decided that the time had come for him to take on Yazid. The misguided scholars, therefore, assume that he engaged him in a military conflict so as to wrest political power from him. Now, Yazid maintained a huge standing army in Syria. Furthermore, he recruited additional forces in Kufa, a short distance of some 50 miles from Karbala, by threats and/or bribes. He had, indeed, assembled a reported minimum number of 30,000 soldiers in Karbala. By contrast, the number of martyrs that Imam Hussain offered was a little over 100. The ratio of 1:300 of the Imam’s to Yazid’s forces led scholars to conclude that the Imam was an adventurist as the risks of a military conflict were enormously high, making his odds of winning the battle virtually zero.

For sure, Imam Hussain decided to confront Yazid but not with an army of soldiers, but with a band of martyrs. His goal was, as he himself declared in a Will that he left behind with his brother Muhammad al-Hanafiyyah in Medina, to “reform the ummah of my grandfather” through the fundamental Islamic principles of amr bil-maruf, enjoining the good, and nahy anil-munkar, forbidding the bad, at the level of the society as a whole. He would arouse the consciousness of Muslims to shock them into seeing the distortions and innovations that had been introduced in Islam and bestir them into action. He was thus a realist, not an adventurist who recognized that martyrdom was not only his sole viable option, but also a potent force to achieve his lofty goal. As the late Ayatullah Murtadha Mutahhari put it, martyrdom “injects blood into the veins of the society.”

Imam Hussain knew that he would have to lay down his life in Karbala. When he left Mecca for his ultimate destination of Karbala, he advised his close associates in no uncertain terms: “Only he who is prepared to sacrifice his life for my sake and to meet Allah should accompany me.”  Since the Imam was aware of the fate that awaited him, the misinformed scholars argue that he committed suicide. People who commit suicide though fall into one of two categories. The first category consists of people who often have a terminal or degenerate disease and/or usually suffer from severe depression or, alternatively, are down on their luck and despondent about their future prospects. The second category comprises of people who wish to draw the media’s attention typically to a personal grievance that they nurse or an act of injustice that they have suffered. In either case, they use whatever means of self-immolation they fancy (over drugging, gunshot, burning, drowning, etc.) to take their own lives.

Imam Hussain gave his life too, not for any bodily ailment or emotional state nor for any personal grievance or injustice, but for a larger principle that he greatly valued. He did not take his own life; rather he let the enemy of the Prophet’s ummah kill him. These are the fundamental differences that distinguish martyrdom from suicide. If on Yazid’s demand for a pledge of allegiance the Imam had, in despair over that order, killed himself, that act would have been regarded as suicide. Instead, the Imam overtly challenged Yazid claim as the righteous leader of the Muslim Empire. He ensured that his sacrifice would be in the wide open field of Karbala where he could starkly juxtapose truth versus falsehood, justice versus injustice, benevolence versus oppression for all to see and to bear testimony to his just cause.

Misconception # 3: Karbala was a “Historic Incident”

An incident is defined as a minor consequence or accompaniment. The delusionary scholars do not deny that such an event occurred in history (as they once did with the claim that Ghadir-e-Khum never happened) but dismiss it as inconsequential, having no significance or impact what so ever. This was presumably because they view it as an accompaniment of Imam Hussain’s adventurous attempt to defeat Yazid militarily. Having misunderstood the goal of Imam Hussain’s movement, the scholars similarly fail to recognize that in the martyrdom of the Imam and his companions and the desecration of their bodies as well as in the captivity of the women and children of his family and their forced appearance in the courts of Ibn Ziad in Kufa and Yazid in Damascus lay the seeds of the Imam’s eventual triumph.

Karbala was far from an incident, it was an epic event. No such event has ever occurred in the annals of history when people of all stripes – in terms of their demographic and socio-economic characteristics as well as their personal achievements and political affiliations – sacrificed their lives out of their deeply-held conviction.  Nor has any sacrifice been so observed by millions of devout followers or extolled by eminent scholars and respected leaders of the whole world as they respectively identify with the religious cause that Imam Hussain championed and the human values that he espoused. The universality and immortality of Imam Hussain’s sacrifice is best captured by the statements of two past presidents of India: “The sacrifice of Imam Hussain is not limited to one country or nation, but it is the hereditary state of the brotherhood of all mankind” (Rajendra Prasad); “Though Imam Hussain gave his life [over] 1300 years ago, but his indestructible soul rules the hearts of people even today” (Radha Krishnan).

Misconception # 4: Karbala is an “Old Story”

The Tragedy of Karbala has been commemorated for over 1400 years with the same fervor year after year. The puzzled scholars look askance and wonder why an event that happened in the distant past and which they dismiss as inconsequential and which allegedly ended in disaster for Imam Hussain still generates so much passion and commitment among followers of the Ahl-ul-Bayt. The scholars believe that the goal the Imam had for his sacrifice died with him as it was relevant only for that period in time and for the situation that prevailed then. Consequently, they maintain that his sacrifice had no durable or lasting effect.

Karbala however resounds even today and will continue to resound until the end of time. The reason is best captured by the famous lyrics of Imam Ja’far as-Sadiq (a) “Every day is Ashura, and every land is Karbala.”  The Imam intimates that tyranny and oppression occur almost every day and these atrocities happen in virtually every country. Any casual observer of the world scene recognizes that the truth of the Sixth Imam’s statement is more evident today than ever before. Thus the message of Imam Hussain and his stand on the day of Ashura in Karbala is relevant for all times and represents a perpetual call for concrete action. The Imam himself cited Prophet Muhammad’s (s) prescription for action that is incumbent upon all of humankind:

“O Men! Verily the Messenger of Allah has said:  If someone sees a cruel king who permits those things which have been forbidden by Allah, who disregards His duty … and that person does not do anything in action or speech to change that situation, then it would be right for Allah to place that person alongside the tyrant leader [on the Day of Judgment].”